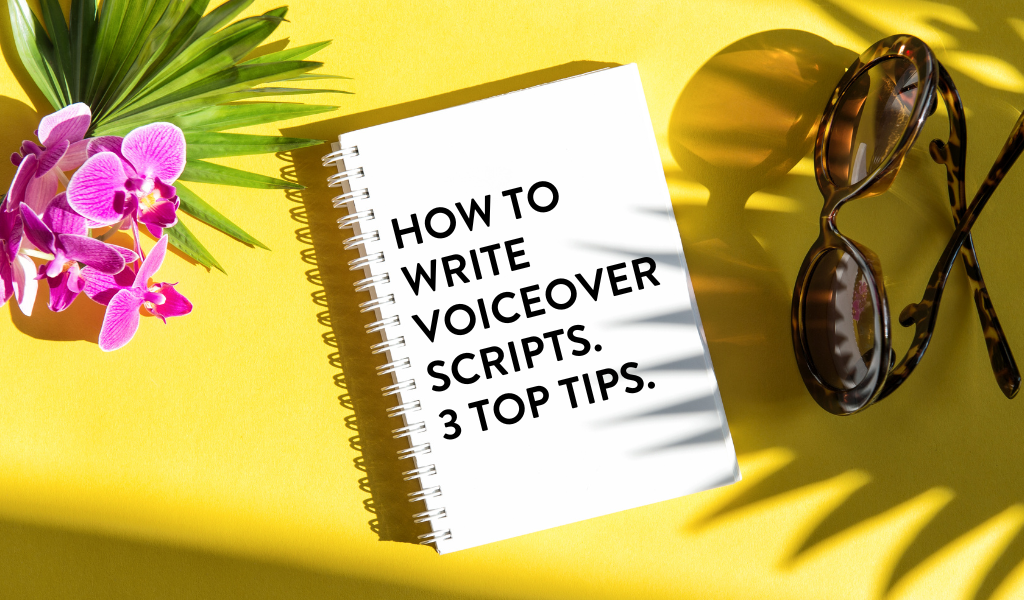 Writing scripts for voiceovers – aka creating copy that is going to be read out loud.

For almost every project involving a voice actor (apart from the occasional bookings where improvisation is needed), there is also a script. And experience tells me that not all scripts are easy to read out loud.

A good voiceover can make even the dullest script sound good – but why take that chance?

Here are 3 simple things to think about that will transform your approach to writing voiceover scripts.

Usually when we think about ‘getting personal’, we’re referring to the audience or listener and how to create an authentic connection with them.  (Which is generally the point of each project – so always worth remembering!)

But the ‘getting personal’ I’m referring to here is the persona of the voiceover.

I often get ‘narrator scripts’, in fact, they’re probably the kind of script I get more than anything else: corporate and explainer scripts, e-learning modules, commercials, promos, telephone prompts.

At the heart of them, there is a kind of narrator-type voice.. And that’s the trouble really, it’s invariably a kind of vague, generic narrator.

Audiobooks and dramas, animations and gaming – these types of voiceover genres have a really clear person or character behind the words. Which means that the voice actor can become someone real, they can become someone that other people, the listener can care about.

They’re really worth looking at because there are a lot of voiceovers in these 100 Top ads, from a variety of countries and across many decades.  It’s fascinating to hear how voiceover styles have changed – but also to see how many commercials have no voiceover at all.

What really stood out to me was – when you put a real person behind the words in the script, that makes it so much easier for the writer, and therefore the voiceover, to tell the story. (And I don’t need to tell you how important storytelling is.).

Even with the shortest scripts, which were often just taglines, it was clear that the writer had thought carefully about who the person was behind the words, the character of the narrator voice.

One of the ads is a real classic – well, for UK audiences of a certain age. It’s a Yellow Pages ad from the 1980s about a man called J R Hartley.  If you don’t know it, it doesn’t really matter (and it’s number 96, if you’re interested).

This is the tagline:

“Good old Yellow Pages. We don’t just help with a nasty things in life, like a blocked drain, we’re there for the nice things too.”

Behind that deceptively simple script is a person:

So, we know that the voice needs to be reassuring and kind, feel like they’re from the company and probably be fairly mature – it’s a certain kind of person who says “good old Yellow Pages”.

Of course, I have idea how the scriptwriter/creative team behind this ad developed this particular script – but the words are very carefully crafted and they make everything easier. Easier to find the right actor, easier to direct them on the day, easier for the voice actor to interpret the meaning and create the right feel.

When you’re writing, you often have clients who want to pack the script with all sorts of information. They also say stuff like, “when we’re writing for an audience like this, they like this kind of complexity.”

But it’s always worth remembering that formal writing creates a barrier for listeners, whoever they are. Too much information can be overwhelming and long sentences and complex words – which work fine on a page –  can be really difficult to follow as well as being really tough to read out loud and make sense of them. So it’s easy for listeners to lose the thread of what you’re saying and just zone out of the whole thing.

Think of your script as a series of small ideas, rather than a continuous monologue.

I do this when I’m scoping out the Talking Creative podcast (this blog post is the text version of one of the episodes). If you look at the titles, there are quite a few “5 ways to do…” and “3 simple steps to…”  And almost all of the content, even when not headed by that kind of title, is usually broken down into bite-sized sections. Quite often, I’ve got halfway through scoping something out and thought, ‘this is two episodes here, I need to reassess. I could make these into two separate, or even three separate, episodes.

When I worked as a promo director, there were loads of instances, when I went back to the client and said, “we’re trying to squeeze too much information in here, we’ve only got 30 seconds. We can make two or three promos from different angles, like a little series, or we just need to double down on this idea here.”

Researchers say we can only hold three or four things in our mind at any one time. And it’s really worth remembering that, because most people listening to whatever you’re saying are probably also thinking about other stuff like their dog and what they’re going to have for tea and does that barista in Starbucks fancy me.

Read your script out loud yourself, before you get it signed off.

‘Before you get it signed off’ is really important because there’s not a lot you can do if you find out in the recording session that it doesn’t sound great or it’s far too long.

When you read your own work out loud, you’ll quickly notice whether the words feel right. Reading it silently in your head or under your breath isn’t enough, you need to do it at full volume. You’ll notice words and phrasing that feel awkward and whether you’re cramming in too many ideas.

It’s also worth noting where you pause for breath because if your breaths fall in the middle of a sentence – and you just haven’t got the breath to actually finish the sentence – that’s a really useful little flag. They’re probably the moments where you need to rethink and redraft your script. Try to resist the urge to think that the voiceover will fix it and make it sound good. If it sounds clunky to you it, it probably is!

Good voiceover scripts need to feel more informal than stuff that’s written down on a page – the classic ‘conversational’ writing. The sentences are shorter, and the words are more familiar.

But – here’s an interesting phenomenon and something I’ve found many times both when I’m reading myself and when I’m directing people – if your script on the page is written in these short little sentences, it can sometimes create a choppy, staccato effect.

When you are reading it aloud, notice if the punctuation or layout that you’ve used is creating this kind of stop-start feel. And, if it is, experiment with the layout if you want a more flowing, chatty feel. It’s less about changing the words and more about adapting the punctuation so it doesn’t lead the voiceover down the wrong path.

You’ll also notice if it really does feel conversational or if it feels kind of awkward – that sort of ‘ad-speak conversational’ which always makes me cringe when I hear it or read it. If it feels fudgy, it’s a sign you probably need to get more personal (point 1 of this article). Think about how that person would say the words, think about how that person would speak.

And, before we leave this whole reading aloud idea, another thing to consider is pausing. A 30 second or 30 minute wall of sound can feel relentless and dense, but the humble little pause can breathe new life into the words that your voiceover is saying.

Because pauses… they draw people in (that worked better on the podcast!).

They can be as compelling as the words either side of them.

The minute you read your own script out loud – not in your head, not under your breath – you’ll discover all kinds of gold in it. And if it IS the kind of script that’s time critical, remember to leave a second or two at the top and the tail. You’ll need those beats once you get into the edit.

So, 3 things to remember when you’re writing scripts for voiceovers. It’s not the full picture by any means but it’s a start.

Always read your script out loud before you get it signed off.

And if you’re looking for someone to read one of your scripts out loud, I’m a full-time UK voiceover artist and director with a broadcast quality studio, based in London. You can listen to my voice demos here.

I’m also the host of Talking Creative – the Art of Voiceover Directing – a podcast for creatives, voice directors and voice artists.  This blog post is available as a podcast episode here.